Healthy 3D Food is Right Around The Corner

A team of scientists from the Columbia University lead by Hod Lipson is actively developing a 3D printer for printing food from several ingredients at once. The main idea is that you’ll be able to insert a special cartridge and receive a complete dish a few minutes later.

This new 3D printer will be available not only for use in the food production industry but for casual consumers too.

At the moment there are two main directions in the sphere for the development to go into:

1. Using special powders during printing to be mixed with different liquids.

2. A more classical way of extruding special gels and pastes from food syringes where the software controlls the right amounts.

In Lipson’s prototype a special infrared element is responsible for inserting certain components at certaintime points. Lipson’s team is developing a really unique device which can work with several different components and use them in a wide variety of ways. For example, the technologies of making simple chocolate and chocolate sweets with filling have substantial differences on each step of the process.

Lipson himself says that the printer could be useful to people in two main spheres:

1. As a special tool for producing food items impossible to be made in any other way.

2. For creating healthy food and food aimed at small groups of people, as lately consumers have been very interested in the vital signs of their bodies and care about their health.

Hod Lipson plans to implement inserting your body’s individual indexes to adjust the production of certain dishes to suit your needs better. Lipson doesn’t believe 3D printing can completely replace traditional ways of food production, but it can help us rethink and improve the existing processes. 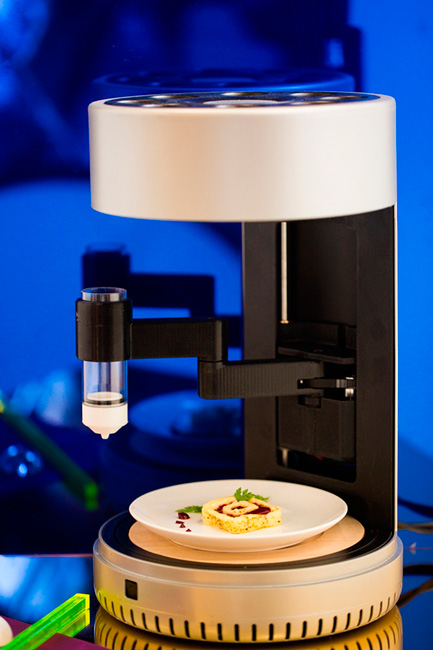