IToo Software announced the release of Forest Pack 8, one of the most powerful plugins for 3DS MAX. It provides a system for scattering a large number of objects through the scene using interface controls or special script language. 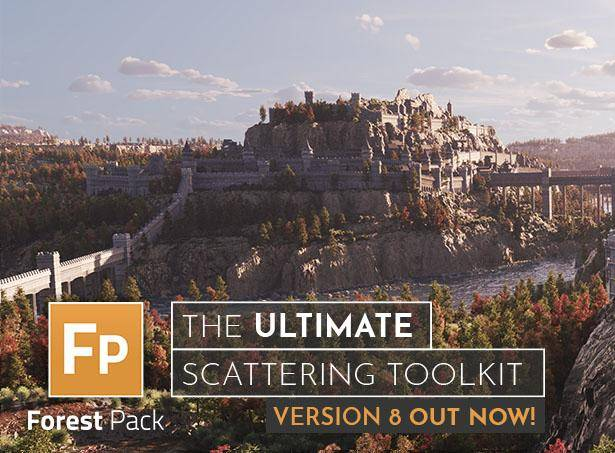 Forest Pack 8 adds a new helper object called ForestSet. This plugin acts as a container for your objects, which can later be used as surfaces for scattering or as objects to scatter. This makes it easier to share the same objects between different scatters and add and remove groups of items in a single click. Each set can contain objects of different types, and only relevant ones will be used in each situation. For example, if you have a ForestSet with a tree, a spline, and a surface, you can choose it as a scatter area, and only a tree and a surface will be used. A ForestSet can also be put inside a different ForestSet.

Linked Areas and Surfaces allow you to pick an area/surface of another Forest object and inherit its parameters. This way, you don’t have to set up major properties for every new Forest area while still having local parameters to tweak separately. The Add Linked Area icon is located where the Add Multiple icon was previously. However, the latter function is still available by clicking the Add Area icon with pressed SHIFT.

Forest Pack 8 will soon be available at our 3DS MAX render farm to use with V-Ray and Corona. You can start your first render at Megarender for free by signing up using a button in the top right corner of the page. We are available 24/7 and ready to answer any questions in the support chat.